Hi all, sorry for taking so long to write again.
Our holiday commenced with 3 days in Kuala Lumpur (KL). This was not a tourist trip, but an opportunity for Chas to try to contact an old friend, Tommy, his partner on the badminton team for 3 years at York University over 40 years ago. Like trying to find a needle in a haystack you say, and you would be correct.

So, where does one start?? First we asked the hotel staff for the KL white pages .... no luck, they do not have a white pages directory, but they have a yellow pages. This was not helpful for us. We then asked our taxi driver how he would begin to find someone .... his response - no idea. We phoned the Australian Consulate to see if they could help. Again no luck. They advised that Malaysia does not have any database of residents for us to refer to!! Chas suggested to them that his only alternative was to go to the family home address on Tommy's letter (dated 1974) to see if any family members were still there, or if neighbours remembered them and could offer any suggestions. The consultant staff's response - Good luck!!

So that is what we did. We caught a train to Klang, 1 hour from KL. The address turned out to be in a business area on a street very near to the train station (thankfully). The number we were looking for(13) was boarded up, so Chas enquired with the staff at the cafe next door (no. 15) who were unable to help. Chas then enquired with an Indian gentleman at no. 11 (a solicitor's office). He told us that the owner at no. 15 purchased the property from the previous owner. He advised Chas to speak with him, and told us that we were very lucky as he knew the guy was at the cafe at that very moment. So back we went to no. 15 where the staff directed Chas to the back office where he introduced himself to the owner, presenting Tommy's letter as validation of his genuine intent to contact Tommy and be reunited with him after 40 years. Wow, such excitement. The owner, another Indian gentleman said that he had indeed purchased the property from Tommy, knew where he worked, and would personally take us to him as we had come all the way from Australia to contact him.

On meeting us, and after an initial hesitation and a little prompting, Tommy called out "Charles Stabler"!! It was wonderful to listen to them sharing stories and laugh about the contents of Tommy's letter from 40 years ago. Tommy took us to his home to meet his wife and grandchildren (whom they were minding that day) and then took us to an authentic, local Malaysian vegetarian restaurant for lunch.

As we travelled back to KL in the train, we could only reflect on the many little situations that had made the day a success - Chas's determination to find his friend, the chap in no. 11 advising us to go back to no. 15 as he knew the owner was in the office that day, his hospitality in taking time from his day and the effort to personally deliver us to Tommy, and luck again that Tommy was in the office as he is now semi-retired and only goes to the office a couple of times each week. Chas and Tommy now have contact details and we hope to see Tommy and his wife in Aussie when they next visit their daughter, son-in-law and grandchild who are now living in Sydney. What a wonderful day. Have a look in the photo gallery for the obligatory photo. 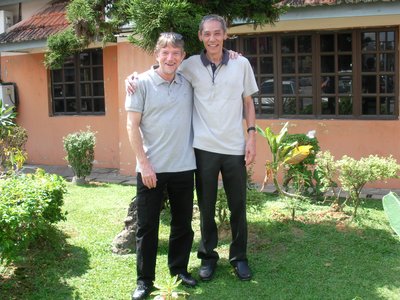 A toast to old friends.